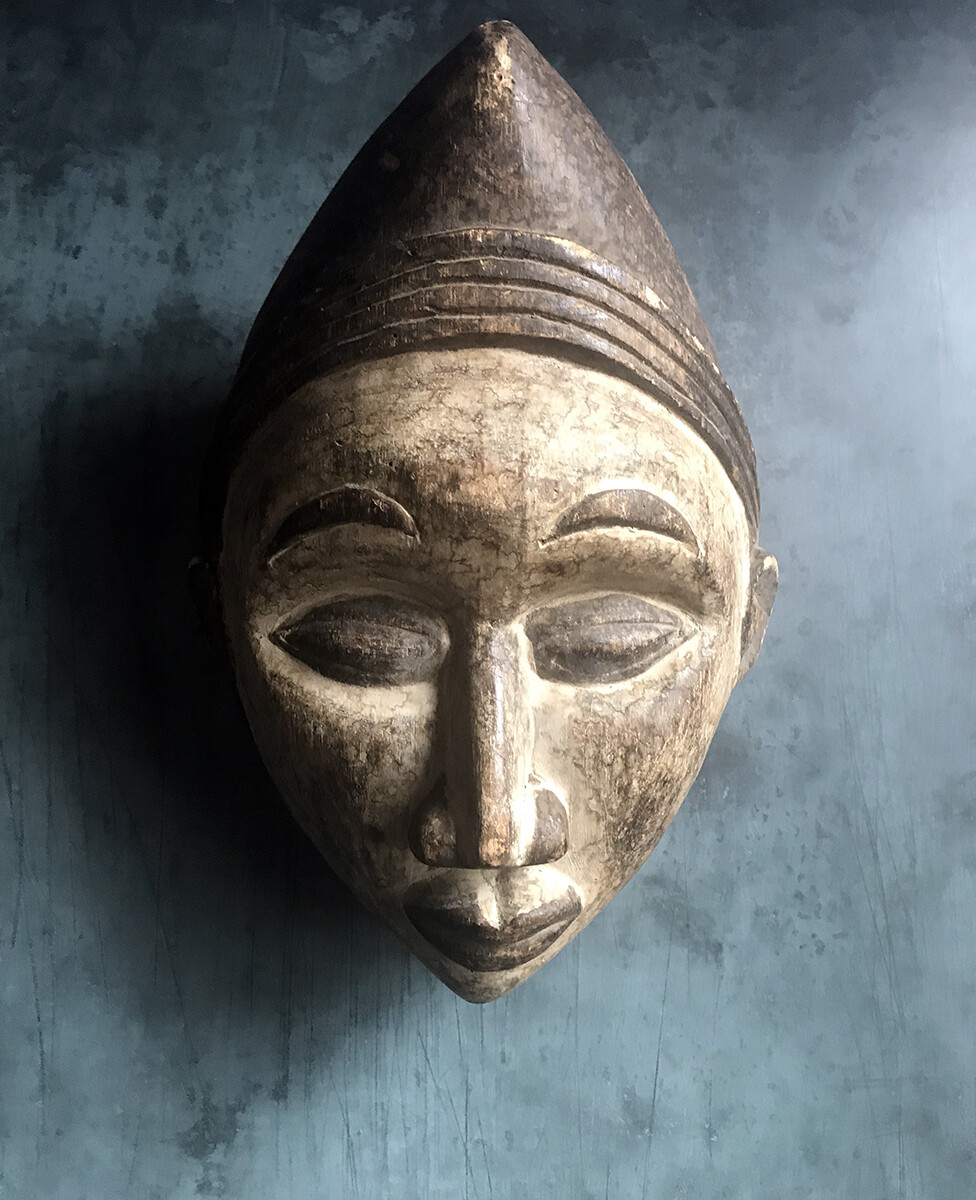 Vintage Punu mask from Gabon. Has a conical crown and expressive face. Chips of wood are missing from the back of mask, but nothing that detracts from the mask.

The Punu reside on the left bank of the Upper Ngoume River (Gabon) and belong to the group of tribes known as Shira which were originally part of the Luango kingdom of Angola. With the Eshira, the Lumbo, the Vili, the Galoa, and the Vungu people, the Punu migrated northwards during the 18th century and settled in the area where they continue to inhabit to this day. They live in independent villages divided into clans and families, and social cohesion is ensured by a society known as moukouji. Its primary role is to regulate community life with regards to social and judicial matters, and mainly it applies itself to the neutralization of evil forces. To this end, officiates of moukoudji utilize a cult kit that includes statuettes, human relics and masks. Punu masks represent idealized female ancestors' faces. The white color of the mask is genderless; white is a symbol for peace, deities, spirits of the dead, and the afterlife. It is thus the predominating color in funeral celebrations and memorials. Therefore the masks were worn during funerals. They appeared also in the magical rites whose function was to unmask sorcerers. The masks have realistic, mostly white but sometimes black faces with protruding pursed lips, globular protruding eyes incised with a curve, high-domed foreheads, and characteristic rigid high coiffures reflecting the Punu women's hair styles. The masks often have an Oriental expression, but no such influence has been established. Many Punu masks can be recognized by raised diamond-shape scarification marks on the foreheads and temples. The scarification marks on the temples are thought to be associated either with a female ancestor, or with a southern sub-group of the Punu tribe. Black face-masks have exactly the same stylistic characteristics as the white masks, but they are believed to have a judiciary function and help identify sorcerers. The performances of the masks are nowadays intended primarily to entertain audiences on festive occasions. Only rarely do the masqueraders fulfill a ritual function of officiating at funerals, when they dance as embodiments of the ancestor spirits. In performances the dancers, wearing costumes of raffia or cotton fabric and animal pelts, move with amazing acrobatic agility on stilts up to six and a half feet in height.

Given the nature of these one-of-a-kind items, we are unable to offer returns or refunds. Therefore, please view all photos and contact us with any questions before buying. Our staff takes special pride in selecting the items found on Global Attic and we want to ensure that you are satisfied with your purchase.

Save this product for later