Harvard & The Curation of Living Rooms

I attended the Black Portraitures IV: The Color of Silence conference at Harvard University March 22-24. The conference’s purpose was to explore the myriad visibility/invisibility issues that confront black people throughout the African Diaspora. Last year’s conference took place in South Africa, and Cuba was originally selected as the destination for this year. However, Trump took a chainsaw to those plans with his restrictions on American travel to Cuba. Although Harvard is the institutional home of the conference, I would have enthusiastically welcomed a return to Cuba.

Nevertheless, instead of packing shorts and sandals, I found myself stuffing winter gear into a bloated suitcase and bracing myself for a snow storm. Ay Dios mio! Thankfully the forecasted storm was a no-show. Regardless, it would have been worth enduring the snow to attend the conference because I had a great time at Black Portraitures IV. I met some wonderful people and learned some fascinating things about global black culture, including what influences curating one’s living room.

My twin sister, Kamilah, presented as part of the conference’s Black Music’s Global Impact panel. The title of her presentation was Robert Williams: Patriarch of House Music and EDM. I’m a Chicago “House Head” and I had to record her presentation, so my attendance was mandatory! Physical labor aside, I truly enjoyed her presentation and those of the other panelists. In addition to attending her panel, I attended other panels with topics that focused on photography, film, Cuba and everything between. There was even a tie-in to home décor with a panel titled The Living Room: Interrogating African American Home Interiors.

For The Living Room panel Jon S. Goff and Jocelyn Imani from the Smithsonian National Museum of African American History and Culture and Elijah Heyward, III from the University of North Carolina, Chapel Hill used prose and photography to present their research on 20th Century African American living rooms. Many of the photos they shared were of homes from the 1950s and 1960s, a period when the fight for racial and socio-economic equality was most intense. With all of the racial upheaval that existed, it became vital for African Americans to create sacred spaces where they could seek refuge and affirm their identities. According to the panelists, this was often the role of the living room.

The panelists stated that African Americans during this time curated their living rooms to preserve family history, perpetuate cultural memory, reflect their core values, and support the function of what happened in the living room. Within these living rooms there was an abundance of family portraits as well as what the panel referred to as the “holy trinity” of portraiture for blacks - the portraits of John F. Kennedy, Martin Luther King Jr. and white Jesus. White Jesus symbolized an almost unshakeable faith. Although JFK and MLK served as embedded reminders of the struggle for equality, they were also beacons of hope for a brighter day.

The “holy trinity” portraits were usually situated alongside other familiar cultural signifiers like plastic-covered sofas and over-sized record player consoles that blared soulful sounds from Gospel to Motown. The living room was, indeed, a sacred spaced for these African Americans as the items they curated in them combined to create a security blanket that shielded the dweller from the harsh reality of daily racism that confronted them outside its walls.

The Living Room panel challenged me to “interrogate” the choices I’ve made in curating my own living room as well as in creating and selecting items to represent the Global Attic brand. What I found was that my selection process is the same.

When I returned home to Chicago, I began to look at the items in my living room with a new pair of eyes. I started to make connections between the quadrant defined at the panel discussion and my own space. I also began to recall the homes of my grandparents and parents, which had undoubtedly influenced my curation process. I found that they had also selected décor that preserved our family history, perpetuated cultural memory, reflected their core values and supported the function of what happened in their living rooms. However, the items they chose were slightly different from those discussed on the panel.

With the exception of the portrait of white Jesus in my grandparents’ home, there was no “holy trinity” in either home. Instead, there were some family portraits displayed against a backdrop of a decidedly global décor that reflected their love for the arts, travel, and black culture. In both homes, there were pianos, record player consoles and a collection of music – from classical and baroque to jazz, salsa and Motown. These items highlighted my family’s love of music as both players and listeners. There were several books strewn about that demonstrated their passion for learning. African artifacts such as sculptures, paintings, masks, textiles and baskets were also permanent fixtures in both homes. They showcased our ancestral heritage. In my parents’ home, they also mixed Chinese wall panels, screens and brass Hindu figures with African artifacts. Growing up in these homes definitely shaped my view of how a living room should look and feel.

Although the aesthetic of my living room is always changing to reflect my evolution as an artist, decorator, collector, and individual, there are mainstays that have been curated in the same fashion of my parents and grandparents. Instead of pianos and record player consoles, I have guitars and a Bluetooth sound bar to stream music from my various devices. Instead of white Jesus, there is a Kenyan peace mask and Cuban Santeria sculpture of Eleguá by the door as well as Buddhas throughout.

These are symbols of my intention to create a tranquil space as well as my pursuit of spiritual enlightenment. I have a gratitude jar to remind myself to take moments to be thankful. Like the homes of my parents and grandparents, African paintings, masks and sculptures dot the space. They reaffirm my identity and heritage as a black woman of African descent. I am also an avid reader, so there is an assortment of home décor magazines and coffee table books in the space. As outlined during the panel, my living room is my sacred space, curated to reflect and reaffirm who I am.

Buddha painting used to create a space of peace.

"Style is about the choices you make to create the aspects of civilization that you wish to uphold. Everything we look at and choose is some way of expressing how we want to be perceived. I mean, why bother choosing a chair because it looks a certain way? Because there's gonna be something about that chair that says something about you."

When I founded Global Attic two years ago, I chose this quote because I believe it truly encapsulates my commitment to create and curate the aspects of civilization that I wish to uphold. I am passionate about preserving history and using the Global Attic brand as a platform to educate our customers and others about other cultures through the works of the skilled artisans with whom we collaborate. These artisans also seek to preserve their family history, cultural memory, and core values, as well as to support function with the items that they make. In collecting their works or repurposing them into functional works of art as part of the Global Attic brand, I’m helping to tell their stories along with my own. In doing so my hope is to uphold the aspects of civilization that are important to me in addition to helping others add a bit of global style to their own living rooms.

Me pictured in front of yet another Buddha in my home. 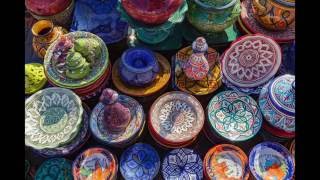